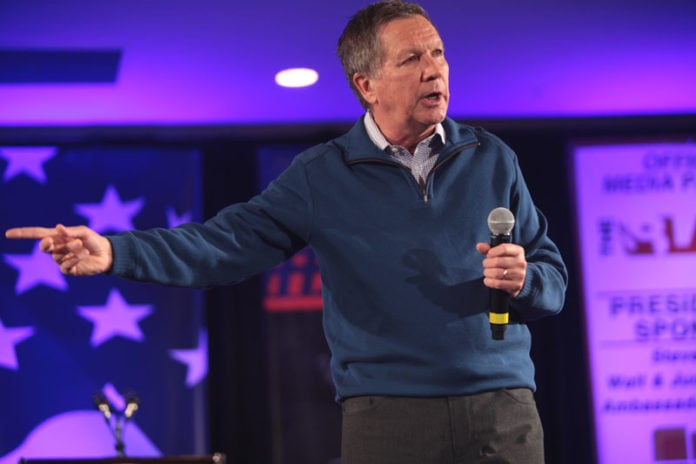 Ohio Governor John Kasich is a man on a mission . . . maybe not his own mission, but he’s on one.

Kasich has no statistical chance of winning the GOP nomination in a fair fight. Literally. He could win every single delegate from now until convention and still not have the required majority.

So why in the heck is this guy still in the race?

Because he’s being a good little soldier for the establishment.

From the start, Kasich was lined up to be a spoiler to Trump in the event that his campaign caught momentum . . . and it did.

Having very little name ID outside of his state, Kasich’s popularity in Ohio was a stop-gap guarantee that Trump (or another somewhat outsider such as Cruz) would not take the Republican nomination.

Marco Rubio is now playing the same role in Florida . . . but failing.

In reviewing Kasich’s FEC reports and those of his PAC, this is a guy who is serving both sides of the establishment, Republican and Democrat.

Kasich’s PAC, New Day for America, has received over $202,700 from Scott Bessent of Soros Fund Management.

The donation is a strong sign that Hillary Clinton does not want to face Donald Trump in the general election and would rather go head-to-head with an establishment candidate or, even better, Ted Cruz.

The Ohio Governor, after voting today, told the press that he would be staying in the race regardless of he wins or losses the state.

His job is done, so why would he stay in if he cannot win?

During the same press conference, Kasich signaled that he would be addressing Donald Trump’s “statements about women” which he just found out about.

Past Ohio, Kasich is going to play the role of attack dog as Rubio will be out or diminished and Ted Cruz has not fared well at all while in the sights of the billionaire front runner.

This is a desperate establishment at play folks and their childish games have made this the most ridiculous election cycle in history . . . and it’s March.