For decades, liberals have forewarned the destruction by conservatives of their Ivory Towers of academia. They whine that conservatives are out to “starve” educational institutions by cutting their bloated, taxpayer-funded budgets; they blame conservative opposition to their precious Common Core scheme as “paranoia,” and they defend teacher unions to the death.

However, it is not the Tea Party, Republican governors, or homeschool families that liberals should fear. The single biggest threat to the ivory bastion that is Big Academia is the students whose very minds liberals have spent decades molding with their meticulously-crafted indoctrination.

Since the 1960s, when liberal activism was characterized by nuclear disarmament peace marches, sit-ins, and anti-Vietnam war protests on campuses from Columbia to Berkeley, liberals have used educational institutions to push their globalist, Big Government agenda into highly impressionable students under the guise of a “liberal arts” education. Today, not much has changed, except for one thing: whereas in recent years it has been primarily administrators and faculty members leading the leftist movements on campus, including cracking down on conservative thought, it is now students who have seized the reins.

What they have wrought is intimidating professors and administrators at major universities from Missouri to Georgia.

Fueled by modern progressivism and cutting-edge technology, today’s students are more militant, and have a far shorter “fuse,” than their professor predecessors. They join only with those who agree totally with their radical agenda and tactics, and demonize everyone else; including the very professors and administrators who once saw these students as their most prized accomplishments. “Things have changed since I started teaching, [t]he vibe is different,” writes a self-described “liberal” college professor, understandably under a pseudonym. “My students sometimes scare me — particularly the liberal ones.”

The latest incident at Emory University, a once-esteemed institution in Atlanta, demonstrates just how unhinged these students have become. When chalk messages supporting GOP presidential candidate Donald Trump appeared on campus sidewalks, rather than ignoring them, or even taking the simple step of using a bottle of water to remove the messages, students organized protests. They quite literally cried out to the Administration that they were “in pain,” and felt “threatened” by the scribbles. The sane response by the Administration would have been to tell the students to “grow up.”

However, in the wake of Missouri University President Tim Wolfe having been pressured to resign last year, after “failing to do enough” to appease student members of the Black Lives Matter social justice movement, it is clear who now has the upper hand; and it is not Emory President James Wagner. Wagner prostrated himself and declared the University would be “taking a number of significant steps” to respond to the Little Darlings in his care. Steps like what — banning college students from possessing chalk, and declaring the campus a Chalk-Free Zone?

Apparently this is what higher education has been reduced to — a four-year incubator for premature adults. Emory’s pathetic response to the Great Chalk Terror underscores how far it has sunk already.

A classical education necessarily requires an environment in which students are forced to study, to learn, and to question ideas and beliefs as a method of teaching them how to “think.” This simply is not possible in an environment where uncomfortable or controversial speech is not only eschewed, but punished.

The darkness at the end of this tunnel will be campuses devoid of independent thought; where the only acceptable speech and behavior is that pre-approved by committees of timorous regents and educators, under the watchful eyes of radical student overseers. It will be a Bizarro World in which students will spend up to $200,000 or more to graduate; knowing much about “gender types”and “white guilt,” but nothing of the genius behind the making of our Constitution or of the rewards of hard work and perseverance that drove Thomas Edison or Albert Einstein.

Should university administrators and state boards of regents fail to regain control of their institutions, state legislators should begin seriously to cut taxpayer funds to public institutions that refuse to fulfill their foundational purpose of actually educating students.

In the meantime – and thankfully — students for whom college is still about challenging ideas, learning to think, and how to create, have at least one defender in their corner. The Foundation for Individual Rights in Education (“FIRE”), founded by Alan Kors and Harvey Silverglate, actively defends the First Amendment rights of students and faculty on college campuses across the U.S. And, recently, they have been busy.

The defenders of the Constitution at FIRE will be even busier in the wake of the Great Emory Chalk Scare. Already, Chicken Little administrators at the University of Kansas are fretting over how to protect their Little Darlings from a couple of scary Pro-Trump chalk messages that appeared on the sidewalks in their “Safe Space.” 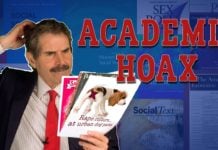