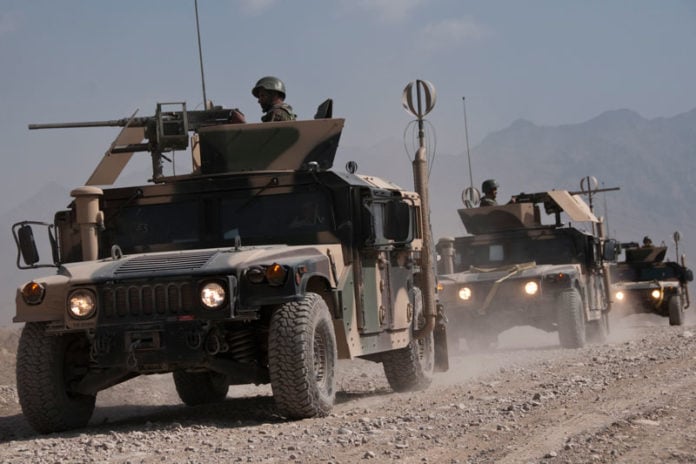 Next Wednesday will see the beginning of Jade Helm 15, a joint military training operation conducted across the southwest. The exercise, which will run through September 15th, is officially “to improve the Special Operations Forces’ UW capability as part of the National Security Strategy.”

The proposal for the operation identifies Texas specifically as having large areas of open land as well as infrastructure to support the scope of the operation, and will include Special Forces from every branch of the US Armed Forces as well as non-military agencies. The official release also identifies Texans’ historical support for the US military as a significant factor in the choice.

Since the operation was initially announced in March, controversy has swirled around it. Folks on both sides of the political aisle are squawking about the problems with the operation, while the military and the government insist that nothing is wrong.

For starters, no embedded reporters are allowed with the operation. The Washington Post reports that they have been denied access repeatedly since the initial announcement, despite the paper’s obvious connections in our nation’s capital. The Post is, of course, worried about the freedom of the press and made an eloquent case, noting the positive coverage generated in previous operations.

Naturally, the military sees it from a different angle.

“All requests from the media for interviews and coverage of U.S. Army Special Operations Command personnel, organizations and events are assessed for feasibility and granted when and where possible,” Lt. Col Mark Lastoria said in a statement released to the Post. “We are dedicated to communicating with the public, while balancing that against the application of operations security and other factors.”

Across the aisle from WaPo, Texas Governor Greg Abbot tapped into conspiracy fears when he ordered the Texas State Guard to “monitor” the operations. Many outlets have expressed concern that Jade Helm is a vehicle for the Obama administration to declare martial law in Texas, and Abbot’s public orders did little to assuage those fears.

From repeated conspiracy theorist Alex Jones to respected economic blog Zero Hedge, a wide array of outlets have noted that Jade Helm is going to ideally position US military forces to pacify possible secessionist movements within Texas. Liberty News has already outlined Texas’ attempts to create a new currency; it would hardly be surprising for the federal government to exert dominance over the state.

In search of clarity, we reached out to former USMC Captain Brent Eisberner, whose career credits include Warfighting Instructor at The Basic School (TBS), Quantico, transition team commander in Afghanistan, and more. Eisberner is currently enrolled in law school at the University of Wisconsin.

“I have participated in exercises like this before,” said Eisberner. “We used civilians and other Marines as role players. We also paid a lot of money to role-players from the specific country so they could talk in the native language, act like they would act in-country, etc. I think most people would be more upset paying hundreds of millions of dollars shipping role players to various bases for training than allowing the military to train out in some town that agrees to have them train there.”

Jade Helm, in fact, plans to pay over $150,000 to locals to assist in the training, according to official documents.

Eisberner laid out more reasons to dismiss conspiracy concerns, addressing anxieties about massive materiel movements. “How do you think they are going to get gear there to train?” he said. “We routinely shipped our gear across country to train with. Not only are you then training on your own gear, but you also get training on transportation of equipment. When I assisted in creating an Afghan Recon company and Engineer company, we had hundreds of vehicles that had to be transported from Kabul to Helmand Province. Having experience working with contracted transportation was invaluable and assisted me in planning for a cross country convoy… This allows for a better selection of equipment tailored to your mission, rather than bringing everything and the kitchen sink just because you can.”

As far as the reasons for using the states listed in the Jade Helm outline, Eisberner noted the troop familiarity with several common training grounds, right down to some soldiers having pizza delivered on their training missions. New ground, he argued, is essential to the troops improving their tactics. “Training in new landscapes, environments, weather, etc. offers a whole set of training opportunities that you simply can’t get,” he said. “It also allows you to see how your troops handle adversity that you can’t get while on a base.”

Still, there is no way to be entirely certain that there is no fire behind this smoke. The official maps of the Jade Helm exercise label huge swaths of Texas as “enemy territory,” a message seen as more than symbolic, given the state’s resistance to the Obama regime.

Chuck Norris threw his hat in the ring, vowing to protect Texas from a Navy SEAL incursion. “It’s neither over-reactionary nor conspiratorial to call into question or ask for transparency about Jade Helm 15 or any other government activity,” Norris wrote at WorldNetDaily. “To those who merely think we should check our brains at the door of the White House and trust what the government does, I would reiterate to you the words of one of our government’s primary founders, Benjamin Franklin, who said, ‘Distrust and caution are the parents of security.’”

Presidential candidate and Texas senator Ted Cruz weighed in as well, noting that while he had no reason to doubt the official claims, “I understand the reason for concern and uncertainty, because when the federal government has not demonstrated itself to be trustworthy in this administration, the natural consequence is that many citizens don’t trust what it is saying.”

Sinister takeover plan or business as usual, Jade Helm 15 rolls out next week. It sounds like either way, Texas’ civilians will be ready.