Barack Obama is reported to have handpicked Ashton Carter co-director of Harvard’s “Preventative Defense Project” as the next Secretary of Defense, replacing former Senator Chuck Hagel.

Carter can be described as a “nerd’s nerd” holding a doctorate in Theoretical Physics from Oxford along with is undergraduate degree from Yale in Medieval History.

The new SecDef pick is also a money-maker having advised investment funds for Global Technology Partners and consulted for Goldman Sachs.

While Ashton Carter may seem like a logical pick for the Secretary of State, a department with the responsibility of fostering international relations and peace, his placement as head of the Department of Defense may set a tone that undermines warfare capabilities.

The cornerstone at the Pentagon still displays the original name of the department. Pentagon visitors can find the inscription at the Mall Entrance of the building.

At the time of establishment and for decades after, the Secretary of War was a civilian position with limited oversight over military affairs. Instead, the original SecDefs were penny pinchers responsible for finance.

Today, the Secretary of Defense serves as the President’s primary advisor on military affairs, typically while holding no military command or even field experience.

The outgoing Defense Secretary, Chuck Hagel, served as a Sergeant in the Army during Vietnam. Hagel volunteered for the draft and was awarded several medals of commendation including two Purple Hearts.

Ashton Carter is expected to be unanimously confirmed for the position by Congress. 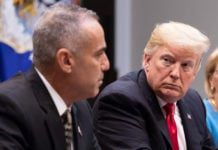 ISIS Viciously Trying To Take Back Syria After Trump Leaves