Three Phoenix Arizona officers were outside of a convenient store when a man attempted to kill all three with his car. What happened next is amazing.

Three uniformed cops were standing outside a gas station when an African American named Marc Laquon Payne rammed the three officers with his car.

He got out and continued to attack, but the men in blue got back up and arrested the man.

One of the officers, the one that was thrown through the window, was on his first day.

Payne is facing charges that include attempted murder and he won’t be released for a long time.

The rookie cop that was thrown through the window and got back up to arrest the driver has not changed his mind about his career. If anything, the video shows that he is needed in this crazy world.

After watching the video and knowing that the man did it on purpose, this is just another example of the hate many in the black community have towards the police.

This should be tried as a hate crime, but there are no reports of the DOJ investigating.

What are your thoughts after watching the above video? Let us know in the comments below. 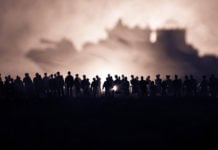