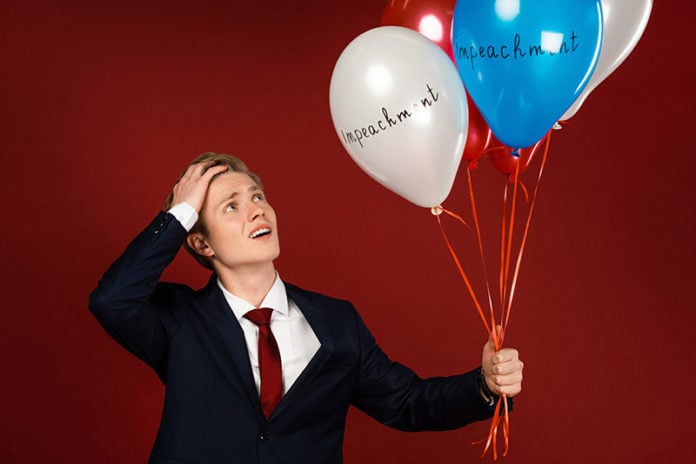 About the impeachment of President Donald Trump she engineered with her Democratic majority, Nancy Pelosi said Wednesday: “It’s not personal. It’s not political. It’s not partisan. It’s patriotic.”

Why then were all eight House members chosen as managers to prosecute the case against Trump, who ceremoniously escorted the articles across the Capitol, all Democrats? Why did the articles of impeachment receive not a single Republican vote on the House floor?

The truth: The impeachment of Donald Trump is the fruit of a malicious prosecution whose roots go back to the 2016 election, in the aftermath of which stunned liberals and Democrats began to plot the removal of the new president.

This coup has been in the works for three years.

First came the crazed charges of Trump’s criminal collusion with Vladimir Putin to hack the emails of the DNC and the Clinton campaign and funnel them to WikiLeaks.

For two years, we heard the cries of “Treason!” from Pelosi’s caucus. And despite the Mueller investigation’s exoneration of Trump of all charges of conspiracy with Russia, we still hear the echoes:

Trump is Putin’s poodle. Trump is an asset of the Kremlin.

All we want, and what the American people deserve, is a “fair trial,” Democrats and their media collaborators now insist. But can a fair trial proceed from a manifestly deficient and malicious prosecution?

Consider. In this impeachment, we are told, the House serves as the grand jury, and Adam Schiff’s Intelligence Committee and Jerry Nadler’s Judiciary Committee serve as the investigators and prosecutors.

But the articles of impeachment on which the Judiciary Committee and the House voted do not contain a single crime required by the Constitution for impeachment and removal.

So weak is the case for impeachment that the elite in this city is demanding that the Senate do the work the House failed to do.

The Senate must subpoena the documents and witnesses the House failed to produce, to make the case for impeachment more persuasive than it is now.

The Senate is supposed to be an “impartial jury.”

But while there is a debate over whether Republicans will vote to call witnesses, there is no debate on how the Senate Democrats intend to vote — 100% for removal of a president they fear they may not be able to defeat.

Assume Zelenskiy, without prodding, sent to the U.S., as a friendly act to ingratiate himself with Trump, the Burisma file on Hunter Biden.

Would that have been a crime?

Why is it then a crime if Trump asked for the file?

There is a reason why no crime was charged in the impeachment of Donald Trump. There was no crime committed.

Not political, said Pelosi. Why then did she hold up sending the articles of impeachment to the Senate for a month, after she said it was so urgent that Trump be impeached that Schiff and Nadler could not wait for their subpoenas to be ruled upon by the Supreme Court?

Pelosi is demanding that the Senate get the documents, subpoena and hear the witnesses, and do the investigative work Schiff and Nadler failed to do.

Does that not constitute an admission that a convincing case was not made? Are not the articles voted by the House inherently deficient if the Senate has to have more evidence than the House prosecutors could produce to convict the president of “abuse of power”?

Can we really have a fair trial in the Senate, when half of the jury, the Democratic caucus, is as reliably expected to vote to remove the president as Republicans are to acquit him? What kind of fair trial is it when we can predict the final vote before the court hears the evidence?

It is ridiculous to deny that this impeachment is partisan, political and personal. It reeks of politics, partisanship and Trump-hatred.

As for patriotic, that depends on where you stand — or sit.

But the forum to be entrusted with the decision of “should Trump go?” is not a deeply polarized Senate, but with those the Founding Fathers entrusted with such decisions — the American people.

In most U.S. courts, a prosecution case this inadequate, with prosecutors asking the court itself to get more documents and call more witnesses, and so visibly contaminated with malice toward the accused, would be dismissed outright.

Mitch McConnell should let the House managers make their case, and then call for a vote to dismiss, and treat this indictment with the contempt it so richly deserves.